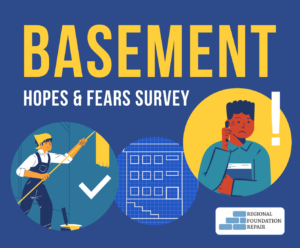 Looking for statistics on where basements are most prevalent in America and how the space is used most often? Great! You’re in the right place. For this campaign, the Regional Foundation Repair team conducted a custom study on basements across the country and analyzed the data to determine:

Our team of foundation repair experts is constantly waterproofing basements, but we know they’re not the only foundation type that homeowners may need help with. In fact, basements are a near-ubiquitous home feature in some parts of the country, and they’re virtually nonexistent in other areas. With the real estate market in so much flux, the Regional Foundation Repair team wanted to know: are basements still a desired home feature in 2021? Do homebuyers seek them out? And how are Americans actually using their basements, especially in the age of COVID, where we’re staying home more often?

In order to find out, we conducted a survey of over 1,000 American homeowners on how they really feel about basements.

To accumulate the most accurate data possible, we surveyed 1,011 American homeowners of all genders, backgrounds, ages, and incomes about basements. Our team put together a list of what we felt were the most important questions regarding this foundation style.

The survey was conducted in November 2021 and all respondents were 18 years old and over. We then sorted all of the responses by state, age, and other criteria to get a good idea of Americans’ general opinion on basements, their usefulness, their value, and more.

Our top results are highlighted in the infographic below and expanded upon throughout this post. Read on to discover what we found!

How Common Are Basements in the United States?

One of our first questions established if the homeowner taking the survey had a basement. Nearly 53% of all surveyed Americans responded positively, making basements the most popular foundation style, even over the most cost-effective slab foundations and crawlspaces.

Basements are necessary in areas where the ground freezes to a depth over four or five feet, as utility lines cannot be run through the freezing ground without a high risk of bursting.

Basements are far less likely in warmer climates because the excavation isn’t necessary to keep utility lines from freezing, and many builders forego the additional work to keep costs down. All respondents in Arkansas, Delaware, Hawaii, Louisiana, Mississippi, and Nevada reported that they don’t have basements. The following least likely states to supply homeowners with basements were South Carolina, Florida, and Arizona.

Who Believes Basements Are Most Important?

Next, we sorted all of the data from our survey to determine which demographics prefer basements over other foundation styles.

We found that basements are more important to Millenials than Gen Xers and Baby Boomers. This is likely due to a housing trend over the past few decades indicating that younger homeowners value space to entertain and enjoy company over most other housing aspects. Open floor plans and finished basements are becoming more popular for precisely this reason.

Finally, based on our survey respondents, we determined that basements are slightly more important to men than women.

What Are Basements Used for Most Often in America?

Next, we asked survey respondents who did have a basement what they used the space for. The most common use was for extra storage, with over 40% of all survey participants confirming their basement was used mainly for storing belongings.

About 50% total use their basements for the laundry room and utility rooms, and about a fifth of all participants noted that they have a home gym in their basement.

Surprisingly, only about 17% of respondents noted that they use their basement as added living space, with a den or second living room located below their first floor.

The General Opinion of Basements in America

Aside from strict data, we wanted to find out what homeowners thought about basements to help us determine their perceived value and appeal.

An astounding 85% of all respondents reported that the square footage a basement adds to the home is generally more important than the monetary value it adds. Although most people prefer the additional space over the added home value, almost 70% of respondents still reported that the increased cost of excavation and foundation construction that goes into building a basement foundation is worth the value it adds to the home.

Generally speaking, basements are highly valued in the United States and are desirable even in states where they aren’t popular. In some states, the fear of basement issues seems to outweigh the desire to have a basement. About a third of all respondents are most worried about basement leaking, and in some areas with above-average rainfall, this worry may decrease the overall value of a basement.

What Are the Most Common Basement Issues in America?

While basements provide increased home value and added living or storage space, they aren’t without their potential for issues. As a part of our survey, we wanted to identify the most common basement issues in the country, so we asked respondents what problems they have run into with their basement foundations.

The most common problem was humidity, with nearly 30% of all respondents reporting that humid air in their under-home area was an issue. In a close second place was leaking or flooding, with almost 23% of survey participants noting that this was their biggest issue. Ugly stains from water intrusion were the least likely problem across the country, followed by sump pump failure.

How to Avoid Basement Leaks and Other Issues

As a foundation repair company, we see our fair share of basement problems, including leaking, humidity build-up, and foundation cracks. While there’s no guaranteed way to avoid these problems, there are several things you can do as a homeowner to reduce the risks drastically.

One of the most crucial things you can do to protect your basement from the elements is to install a basement waterproofing system. These systems range from $2,000 to around $10,000 and average approximately $7,000, but they help keep your basement safe from leaking, cracking, structural damage, and humidity build-up.

A waterproofing system on a basement foundation can consist of a number of measures to keep water away from your home. These include gutter systems, French drains, dampproofing, sump pumps, floor drains, and waterproofing paint. A complete system will keep water from soaking into the soil around your foundation and leaking inside, and it will include fail-safes like interior drainage systems to remove water if the basement does leak.

Although waterproofing systems should always be installed by a professional like us, there are some things you can do as DIY solutions as well. One of the most straightforward solutions to prevent humidity accumulation and mold growth is to install a dehumidifier in the basement. Dehumidifiers remove moisture from the air and either collect them in a basin you can manually empty or route the water directly to a drain line for automatic disposal.

You can also grade the soil away from your home as a DIY home improvement project. In areas with little or moderate rainfall, soil gradation might be enough to solve moisture and water problems in your basement. By sloping the soil away from your home, precipitation will naturally move out into your yard and have a lower chance of soaking through your basement walls.

Finally, another professional solution to prevent moisture build-up and leaking is to have foundation cracks sealed. Most foundations crack over time from normal settling, while others crack because of structural damage or instability. A foundation expert like ours can identify when the problem is severe and when sealing the crack with a waterproof caulk will suffice. In the latter cases, a routine crack repair can help keep water and humidity out of your basement.

Wrapping Up: Major Insights and Conclusions

Our study identified that more than half of all Americans have basements, and nearly three-quarters of the country’s population believes that the additional cost to install a basement is worth it in the long run. Basements are the most popular foundation style in America, despite being more prevalent in northern states that have cold climates than in southern states or those with more temperate weather conditions.

One of the most staggering findings of our survey was that more than 75% of all new homebuyers desire a basement, and almost a third of them will only consider buying a home if it has one.

We discovered that basements are slightly more desirable to men than women, and they’re more desirable to millennials than older generations. Most respondents use their basements for storage, utilities, and laundry, with nearly a fifth of participants reporting that they use it for additional entertainment space.

Finally, we found that humidity and basement leaking are the most common homeowner fears when considering a home with a basement. If you have an issue with humid air, active leaks, cracks, musty odors, mold growth, or any other problem with your basement, it’s important to contact experts like us to assess the situation and carry out a permanent fix quickly to prevent further damage to your home.