Home > Foundation Repair > The US States Most Concerned with Climate Change

The US States Most Concerned with Climate Change 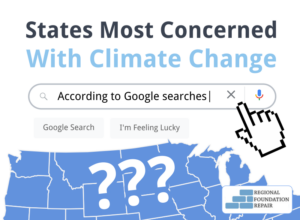 Looking for information and data on where effects of climate change are of greatest concern in the United States? Great! You’re in the right place! The Regional Foundation Repair Team analyzed search engine data trends to:

Our team of foundation repair specialists sees homeowners deal with basement flooding on a regular basis, which is an issue that is likely to only worsen as global warming does. Earlier this year, after reading that the August 2021 IPCC (Intergovernmental Panel on Climate Change) report indicated a “code red for humanity” when it comes to the effects of climate change, our team grew even more concerned.

Using the top climate change-related searches on the web, we used Google Trends to break down which US states are seeking climate change information, whether it be in the form of statistics, news, or information on perceived hoaxes.

To determine where climate change is of most significant concern and likely a common topic of discussion, we analyzed an entire year’s worth of Google Trends data — from October of 2020 through October of 2021 — to see what residents in different states are searching for related to climate change. It’s important to note that Google Trends data is normalized across geography and time range for easy comparison between search terms. The result of a Google Trends query for a term is a number between 1 and 100, representative of the term’s popularity across all topics and searches.

To conduct our analysis, we dove into data on searches containing key phrases, including “climate change,” “climate change news,” and “effects of climate change.” This gave us some insight into which states’ residents are regularly thinking about climate change and looking to keep up to date on news and new information.

Finally, we compared these two data sets to determine the states where residents are generally most concerned with climate change.

US States Most Concerned With Climate Change

Our first set of data helped us figure out where climate change is a significant cause for concern. These data include all Google Trend searches for anything related to climate change, including news reports, updates, and initial research.

Coming in at the top was California, with a search interest of 4,225, making them the most concerned when it comes to climate change. Tied for the most popular searches in California over the were seven terms:

Florida and New York came in at numbers two and three, respectively, with search interests of 3,384 and 3,245. The only other state with an interest score over 3,000 was Washington, with a score of 3,187.

It’s essential to keep in mind that these are some of the most heavily populated states in the country. However, Google Trends bases these search interest scores based on all searches taking place in the state, so population is automatically controlled for in the numbers.

The least concerned states were North Dakota and South Dakota, at 158 and 175, respectively, less than 4% of the search interest of California.

In North Dakota, the least concerned state, the most searched-for terms included very general searches, like “what is climate change” and “global climate change.”

A surprising 21 states all came in with a search interest score of less than 1,000. Eight states in total — North Dakota, South Dakota, Wyoming, Alaska, Mississippi, Vermont, Montana, and Delaware — all came in at less than 500, less than 12% of California’s score.

US States Googling Climate Change Questions the Most

California once again comes in at the #1 spot, confirming that residents not only are most concerned about climate change in general but want to know more about it than anyone else in the country. Their search interest score of 870 is just a touch above Florida’s at 810. These two states are the only ones to breach the 800 mark.

How Climate Change Is Affecting US Residents

Climate change affects humans worldwide, and our research uncovered that US residents in coastal locations tend to be more concerned with climate change. This is very likely due to the fact that global warming is increasing the risk of flooding in coastal areas, making climate change a real and present danger for those along the coasts.

This idea is backed up by our own internal data, which shows that the demand for basement waterproofing and basement repair is increasing, especially in areas close to sea level where flooding is occurring most often. We’ve seen a substantial uptick in service calls for moisture issues, basement flooding, and water-related foundation damage.

It’s not too much of a leap in logic to assume that this increase in demand is at least partially related to the increased risk of flooding as a result of climate change.

Wrapping Up: Major Insights Across the Country

One of the most interesting things we discovered in our research was that highly populated states tend to be more concerned with climate change.

The top 5 most populated states are California, Texas, Florida, New York, and Pennsylvania. When it came to general concern regarding climate change, these states scored 4,225, 2,959, 3,384, 3,245, and 2,312, respectively. These scores are all well above the US average search interest score of 1,471.

The search interest scores are all controlled for population, which means residents of these most populated states are genuinely more concerned with climate change on average than those living in less populated states.

Similarly, the five least populated states — Wyoming, Vermont, Alaska, North Dakota, and South Dakota — all scored within the bottom ten states as far as the overall concern with global warming goes. All of these states scored under 440, less than 10% of California’s score.

Another fascinating insight we discovered from our research was that the states least concerned with climate change tend to be landlocked, far enough from the coast to be personally worried about flooding as a result of climate change. This supports the idea above that residents on or near the coast are more concerned with global warming because it is affecting them directly.

Our team of professionals at Regional Foundation Repair is committed to providing top-tier foundation repair, whether you’re dealing with stabilization problems, differential settling, or flooding and moisture issues. Whether you’re located in coastal states more affected by climate change or you live inland, contact us to safeguard your foundation from water, movement, and damage.