Home > Foundation Repair > Cities With the Best and Worst Rated HOAs, According to Yelp

Cities With the Best and Worst Rated HOAs, According to Yelp 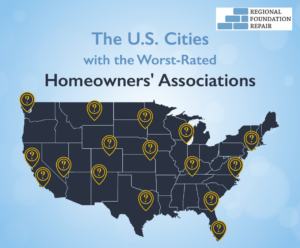 Looking for data on where the lowest-rated and top-rated HOAs are in the country? Great! You’re in the right place! For this campaign, the Regional Foundation Repair Team analyzed Yelp data to:

One of the major downsides of homeownership is dealing with the costs of repairs and ongoing maintenance. Foundation repair following damage or severe settling is often one of the most costly repairs homeowners will face, sometimes topping $50,000. As foundation professionals, we know that homeowners will do just about anything they can to avoid being on the hook for such expensive repairs.

Luckily, living in a homeowners’ association (HOA) — a subdivided community governed by a board that makes and enforces rules for the community — often removes the responsibility of repairs and maintenance from the homeowner. However, HOAs are not without their downsides. The internet is full of tips and tricks on dealing with strict HOAs, but where are these associations giving homeowners the most trouble, and where are they the most reasonable?

We focused our study on the most centralized data set available (along with reviews) of residential neighborhood homeowner associations. To get the most extensive data set for this study, we pulled all of the relevant data possible from Yelp, including the number of listings for homeowner associations in each major metropolitan area throughout the United States. While every HOA might not be listed on Yelp, we scraped this data in order to get an accurate sampling of homeowners’ experiences with them across the nation.

We then scoured thousands of reviews and compared overall HOA impressions out of 5 stars, as well as individual positive, negative, and neutral reviews to see what homeowners had to say about their HOAs.

By comparing these two data sets, we’re able to gain some insight into which states and metropolitan areas give you the best chance of living in an HOA that provides more good than bad. We took the population and concentration of HOAs into account to control for more negative reviews in areas with more HOAs and other potential data pitfalls.

U.S. Cities With the Most HOAs

The first data we pulled was in an effort to find the metropolitan areas in the U.S. with the highest concentration of homeowners’ associations. 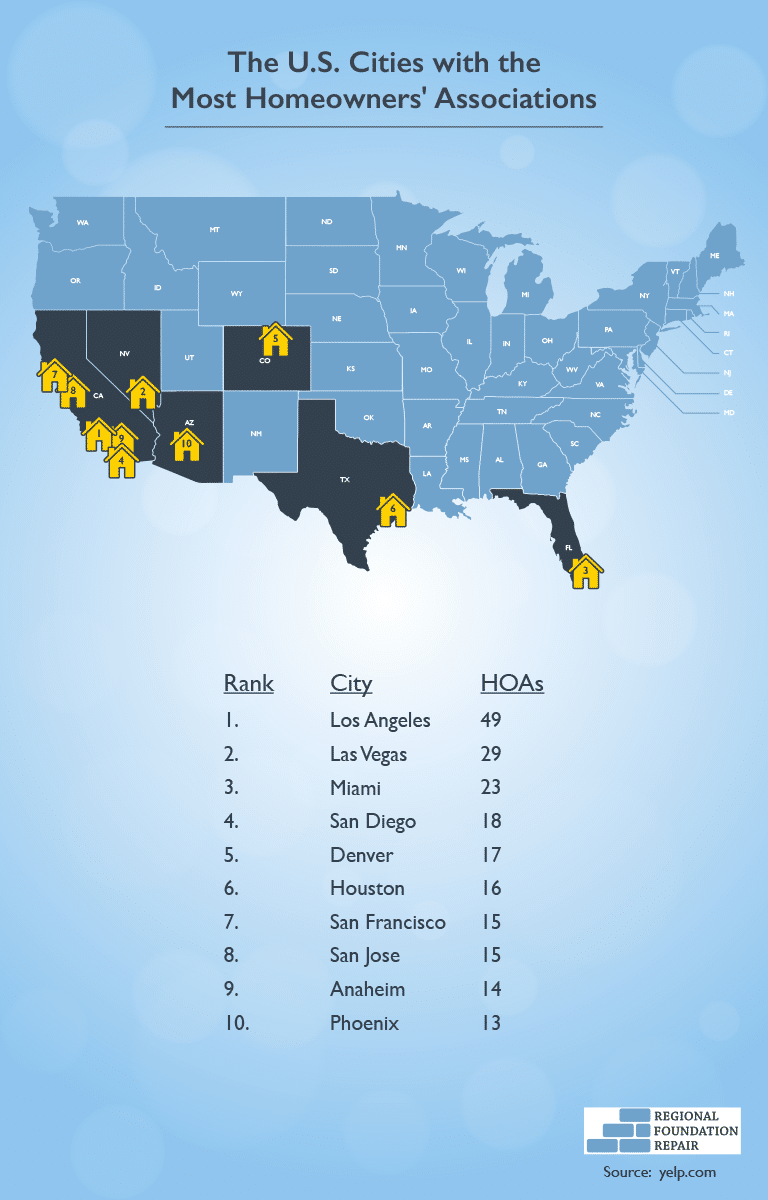 Coming in at the number one spot is Los Angeles, CA, with an impressive 49 HOAs. This is about double what any other metro area in the country has to offer in the way of HOA options.

The next highest concentration of HOAs in a metro area is in Las Vegas, NV with 29. Miami, FL is the only other metro with more than 20 HOAs, coming in at 23.

Phoenix, AZ comes in at number ten for the concentration of homeowners’ associations in the country, with just 13. Interestingly, Phoenix (517.9 square miles) is geographically a larger city than Los Angeles (501.55 square miles), but it has less than a third of the number of HOAs.

Anaheim, CA has the ninth-highest concentration of HOAs with just 14, followed by San Jose, CA and San Francisco, CA, each with 15.

Many people who currently live or have lived in an HOA know how frustrating and discouraging it can be to deal with HOA fees, rules, and regulations. Our next data set shows the cities throughout the United States with the lowest-rated HOAs. 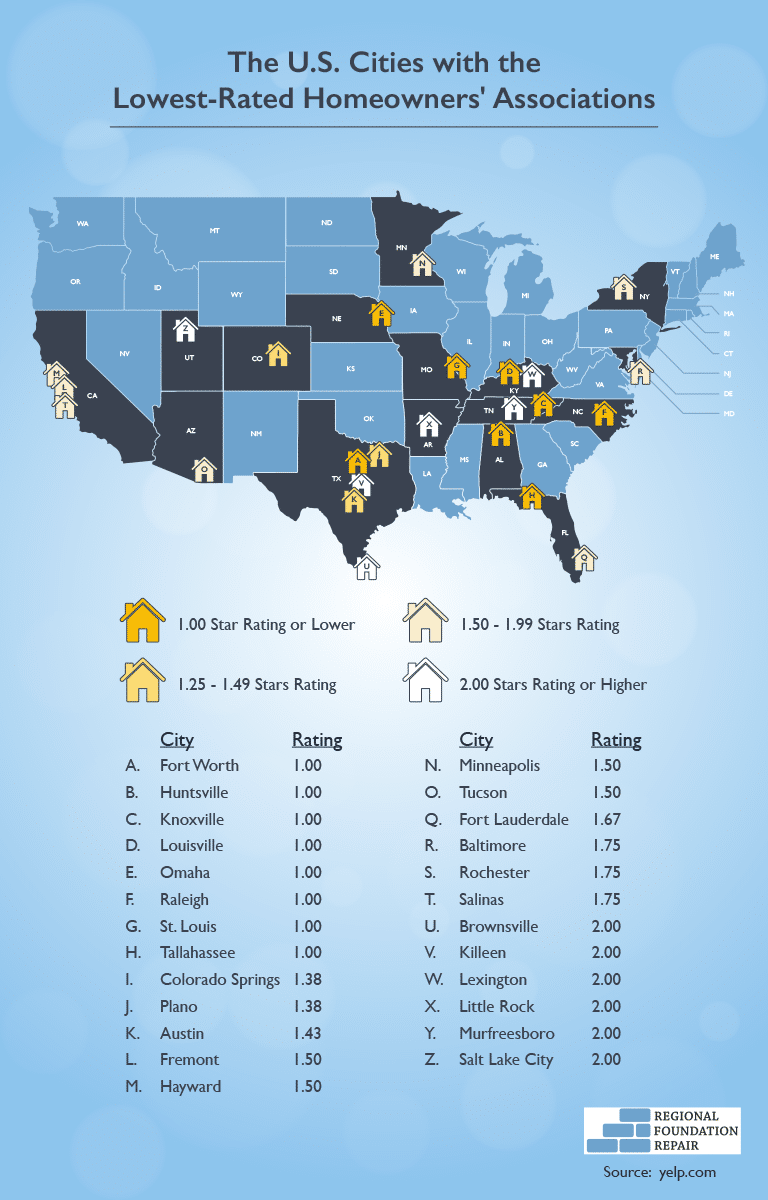 A staggering EIGHT cities are tied at a single star: Fort Worth, TX, Huntsville, AL, Knoxville, TN, Louisville, KY, Omaha, NE, Raleigh, NC, St. Louis, MO, and Tallahassee, FL. Keep in mind that Yelp’s lowest possible rating is 1 star, so we expect that many of these would be an average of 0 stars or just above 0 if a lower rating were possible.

Fort Worth, Knoxville, Louisville, Omaha, Raleigh, St. Louis, and Tallahassee all have just one HOA each within city limits, each of which has an average of a 1-star rating. As such, staying away from HOAs in these cities is highly recommended, as you’re guaranteed to land yourself in a very poorly rated homeowners’ association.

Reviews from the HOAs in these metro areas include reports of rent getting raised without cap every year, price gouging for required exterior services, abundant unresponsiveness when it came to homeowner issues, and neglected common areas.

Huntsville has just 2 HOAs total, both of which have managed to amass only a 1-star rating. Some of the stand-out reviews of the HOAs include reports of homeowners being “harassed” for certain color curtains in their windows (yes, really) and holding garage sales without filing excessive paperwork beforehand. It should go without saying that avoiding HOAs in Huntsville, AL is also highly recommended.

Unfortunately, many metropolitan areas amassed HOA reviews under the 2-star mark. A brief list of these cities is included below, and all of these cities should come with a “buyer beware” warning:

For homeowners looking to buy in an HOA potentially to avoid responsibility for costly repairs and ongoing maintenance, there are some great options throughout the U.S. Our third and final data set identified a much more positive outcome: the top U.S. metropolitan areas with the highest rated HOAs. 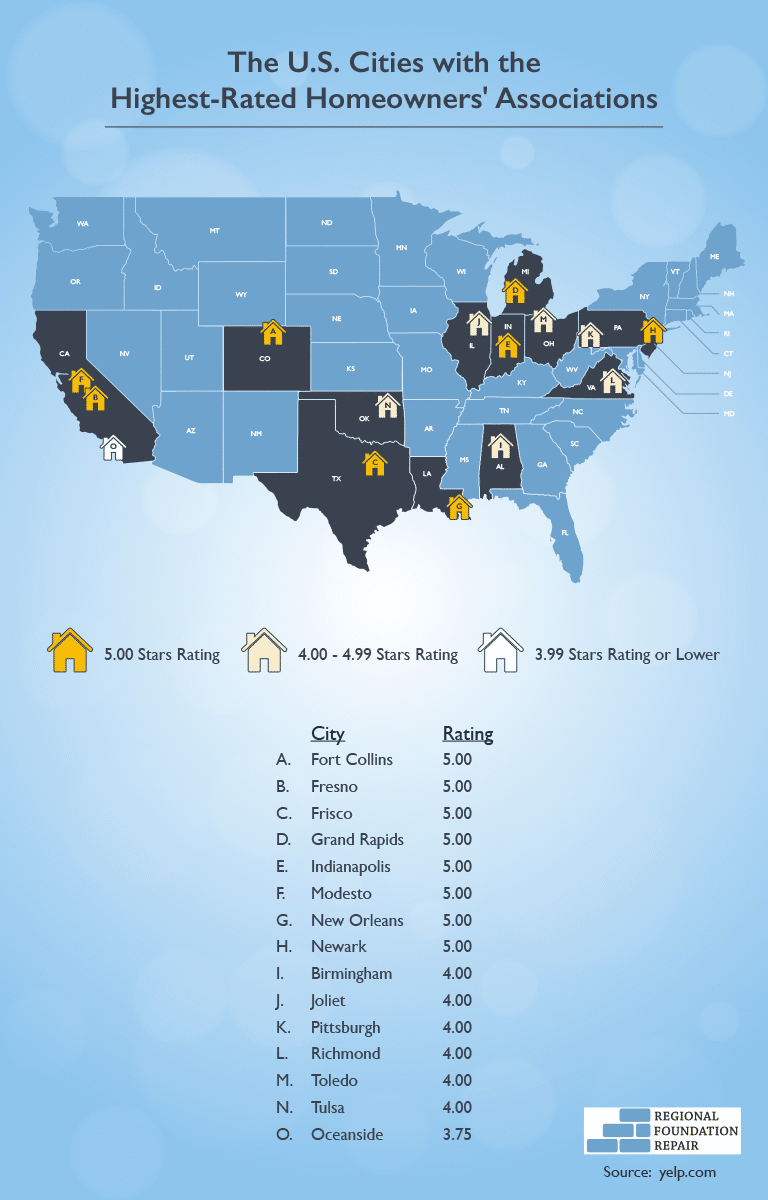 Reviews from these cities include reports of the HOA going above and beyond with maintenance, having excellent response times, educating homeowners on rules and the reasons for regulations, and maintaining a minimal amount of paperwork for moving, hosting parties, and exterior decor.

Many of the reviews we read from residents of these cities mention that the homeowners have dealt with other HOAs in the past, so they have experience with what an HOA shouldn’t be and, now, what it should. It’s abundantly clear that a good HOA like the ones in these eight cities can make an enormous quality-of-life difference for homeowners.

Other cities with highly rated HOAs worth mentioning are listed below, along with their average overall ratings:

If you live in an HOA located in one of the most problematic states or cities, your outlook on your living situation might seem bleak. Thankfully, there are a number of things you can do to make dealing with your restrictive HOA more manageable.

Understand the Rules and Bylaws

Sometimes, not knowing the rules and bylaws of your HOA can lead to easily avoidable issues. We’ve seen countless homeowners in HOAs struggle needlessly because they don’t realize that garage sales can only occur at certain times or that specific paint colors for front doors are a requirement. The rules might seem petty, but once you understand them and embrace them, you’ll likely find that they aren’t so strict afterall.

Speak to Your Neighbors

You might feel like you’re fighting against the association yourself, but you’re never alone! Your neighbors are dealing with the same violations, fees, and assessments. Speaking to them can be enough to ease the burden of dealing with an HOA, and you might find that you need to come together to push back against particularly unfair rules or fees.

Sitting through HOA meetings might seem boring — and it probably will be! — but staying up to date on upcoming changes and plans can help you prepare for the worst and promote the best.

Whenever you plan to make changes to your home, contact the HOA first to get approval. This might seem like an unnecessary step, but you’re more likely to be met with the go-ahead before hand than a violation and fee afterward.

No one wants to pay fees and violations, but staying up to date on your payments will help avoid foreclosure and other legal action. It’s best to bite the bullet and continue paying while you work with fellow residents to resolve any unfair charges or fee schedules.

Finally, you might find that relocating is your best — or only — option. Consider moving outside of the HOA in the same state, or choose an HOA in one of our top-rated states and cities we mentioned above!

Buying property in an HOA can either be a wonderful experience or an endlessly frustrating one.

If you get a responsible and responsive management company that will take responsibility for expensive property repairs like foundation damage, you may never want to leave. If you’re stuck with an HOA that is borderline impossible to deal with, constantly in your business and has excessive restrictions and regulations, you may want to leave before all your furniture is moved into your unit.

Our research process aimed to identify your best chances of securing a spot in one of the best HOAs in the country. Fort Collins, Fresno, Frisco, Grand Rapids, Indianapolis, Modesto, New Orleans, and Newark all have 5-star overall HOA ratings, meaning they’re the best metropolitan areas to relocate to if you’re looking for an HOA.

Los Angeles, Houston, San Francisco, San Jose, and Phoenix are the only metro areas in the top 10 cities for HOA density that have above-average HOA ratings overall. As such, these cities give you the best opportunity to be satisfied with your management company if you do no research beforehand.

Unless you’re looking for endless headaches and unreasonable restrictions, you should probably avoid buying in an HOA in Fort Worth, Huntsville, Knoxville, Louisville, Omaha, Raleigh, St. Louis, and Tallahassee. All of these cities have the lowest possible overall HOA ratings.

The national average HOA rating is just 2.74 stars, so unless you’re very careful about the HOA you choose, you might be better off sticking with your property outside of an association and paying for foundation repair and other maintenance yourself.

For those who aren’t a part of an HOA, our team at Regional Foundation Repair is here to assist you with best-in-class foundation repair services. Just fill in our contact form, and we’ll show you response times, expertise, and professionalism that even the highest-rated HOAs can’t match!